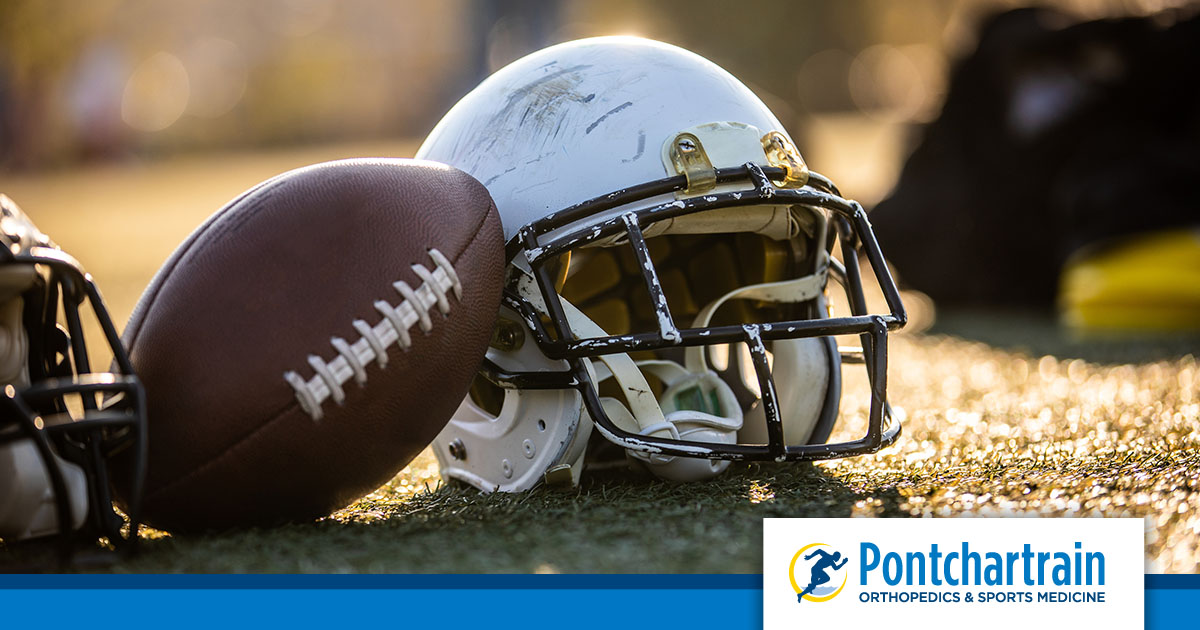 Role of the Sideline Physician

When the seasons turn from summer to fall, you’ll find Dr. Joseph Finstein on the sidelines as one of south Louisiana’s highest-profile schools plays Friday night football games.

But he’s not there to cheer on De la Salle High School. Instead, Dr. Finstein is continuing his fifth year as the Cavaliers’ volunteer team physician. In today’s post, Dr. Finstein discusses the role of the sideline physician, the injuries he sees, and a dangerously common misconception around medication and concussions.

WHY HAVE A SIDELINE PHYSICIAN?

Over the past 8 years as a sideline physician in the New Orleans area, Dr. Finstein has gained important insights into what parents should look out for as players navigate through game-related injuries.

Perhaps the most common issues are misconceptions about treatment options – including the use of NSAIDS, a family of anti-inflammatory drugs that has become one of the most commonly prescribed pain relievers in the world – and mistakes made when players try to return to the field without proper treatment.

That’s why his presence is so important. When something goes wrong, a sideline physician plays a critical role in getting a patient on the road to recovery as quickly as possible.

WHAT IS THE ROLE OF A TEAM PHYSICIAN?

If you’ve attended a sporting event, from high school to the pro game, you’ve probably spotted a physician near the action. But what exactly do caregivers like Dr. Finstein do?

The American Academy of Orthopedic Surgeons defines team physicians as people who fulfill a “leadership role in the organization, management and provision of care of athletes in individual, team and mass-participation sporting events.” Put more simply, they’re on hand to provide critical assistance, if needed. 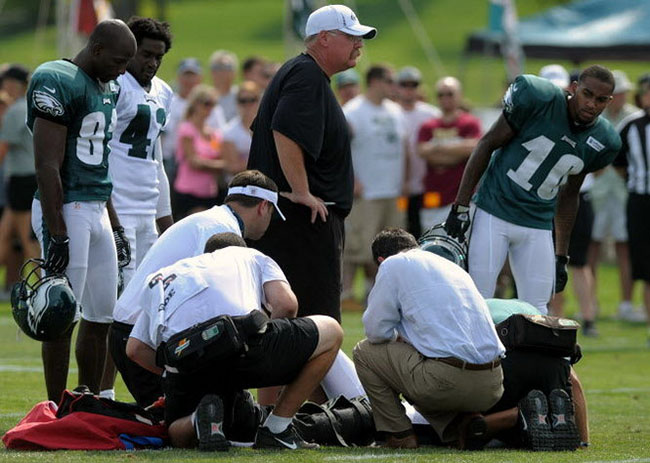 Dr Finstein (in visor) tends to an injured eagles player while Andy Reid and Desean Jackson look on.

Some doctors associated with sports care, like Dr. James Andrews, have become known worldwide. More often, however, those on the sidelines are devoted neighbors like Dr. Finstein.

While he has previously assisted in the care of pro athletes from the Philadelphia Eagles, Flyers, Phillies and Soul, as well players at St. Joseph’s University, he sees himself as a committed community servant who can help ensure those playing sports have access to immediate, skilled medical attention.

It's Important to Stay Vigilant

A fast-paced game like football can result in myriad aches, pains and mishaps – but quickly and accurately reporting these injuries is of the utmost importance. Significant injuries, with symptoms such as severe pain, swelling or numbness, likely need immediate attention.

“I predominantly see contusions, shoulder labral tears, meniscal tears and ACL tears, ankle sprains and concussions,” Dr. Finstein said. “Tell the doctor or trainer if a player is having an issue, so that it can be evaluated and treated prior to the player needing to miss practice or play.”

Players are increasingly turning to NSAIDS to relieve pain. These nonsteroidal anti-inflammatory medications include aspirin and over-the-counter pain relievers like Advil, Motrin and Aleve, but they can also be administered topically on sports sidelines. With less-serious injuries, however, NSAIDS might not be needed, at all.

“The best thing for parents to stay vigilant about is icing after games,” Dr. Finstein said. “Take NSAIDS only when appropriately recommended by the team doctor or trainer.”

When is Surgery Required?

Many sports injuries don’t require surgery. In some cases, a minimally invasive procedure can repair torn tissue or realign bones. If the injury is more serious, however, a combination of arthroscopic surgery, fracture management techniques and/or sports-injury management techniques can also be tailored to meet each patient’s unique needs.

Injured athletes will then have to focus on rehabilitation, in addition to their scouting report. Dr. Finstein notes that with appropriate evaluation and treatment many athletes can continue to compete while healing their injury.

“It’s important to finish and cooperate with rehab after an injury,” Dr. Finstein said. “Don’t stop rehab because you are back to playing. Stop rehab only when the patient is 100 percent.”

Once pain and swelling has subsided, a sports-medicine physician’s plan can quickly return the athlete to play. They can also provide important advice on exercise and nutrition – and that can prevent additional injuries and recurrences.

"NSAIDS should NEVER be used for concussion...they can encourage bleeding from damaged blood vessels in the brain."Dr. Joseph L. Finstein

NSAIDS should NEVER be used for concussions, Dr. Finstein added. This family of anti-inflammatory drugs is meant to decrease inflammation but also slows blood clotting, so they can encourage bleeding from damaged blood vessels in the brain. Instead, those medications are better suited to lessen pain associated with soft-tissue and joint injuries. Tylenol or acetaminophen should be used to help with pain from concussion after evaluation by a medical professional.

“The most common medical misconception is that acute concussion patients can take NSAIDS,” Dr. Finstein said. “They should not.”

Instead, a period of evaluation – and rest – is required. “It is difficult to predict on the day of injury when a concussion will resolve,” he said. “It could be a day, a month or a year.” As a result, most medical professionals have a series of tests to help diagnose concussion and evaluate return to play.

Here’s to a successful, healthy season – whichever team you’re pulling for on Friday nights. But if your child or player is injured, remember Pontchartrain Orthopedics & Sports Medicine’s Walk-In Clinic is open the next morning. You can see the region’s leading orthopedic specialists for on-site x-ray, bracing, casting and injections with no appointment required between 9AM and 1PM on Saturdays. 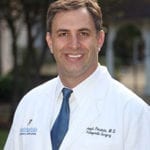 This website is not designed to and does not provide medical advice, medical diagnosis, professional opinion, treatment or services to you or any other person. Through this website and links to other websites, Pontchartrain Orthopedics & Sports Medicine provides general information for educational purposes only. The information provided in this website, or through links to other sites, is not a substitute for medical care. You should not use this information in place of a visit, call, consultation or the advice of your healthcare provider. Pontchartrain Orthopedics & Sports Medicine is not liable or responsible for any advice, course of treatment, diagnosis or any other information, services or product you obtain through this site.